HOW AND WHERE TO USE THEM

Use the Aulterra Neutralizer™ to neutralizing the EMF radiation from your electrical devices such as remote controls, PDA's, smart phones, portable phones, remote controls, kitchen appliances, computers, hair dryers. One or more units per device.

P.S. MAY NOT BE RETURNED IF YOU'VE OPENED THE PACKAGE

JUST STICK IT ON AND YOU’RE PROTECTED. Here are the instructions.

The Aulterra Neutralizer™ Will Not Interfere with the Functioning of Your Cell Phone. Unlike other EMF blocking devices, the Aulterra Neutralizer will not affect cellular phone reception or transmission. Your phone will still be the convenient communications tool you wanted it to be--it will just no longer be dangerous to your DNA and your health.

Man-made EMFs have a chaotic energy and different frequency than natural EMFs and can disrupt or distort organic energy patterns. It is precisely this ability to distort human energy patterns that causes artificial EMFs to be hazardous. Human-made EMFs may cause cancer and present other grave dangers to human health.

Neutralizer provides protection from molecular, electrical, and thermal radiation emitted from electronic devices. This chart shows before and after EMF fields using the Neutralizer:

What Makes the Neutralizer Work?

Aulterra is a homeopathically activated combination of natural paramagnetic and diamagnetic elements which neutralize the effect of man-made EMF exposure on human DNA. Noted DNA researcher Dr. Maria Syldona recently completed a study in which she concluded: ' . . . the natural coherent energy emanating from Aulterra neutralized the incoherent energy from the man-made EMF, rendering it harmless to human DNA. 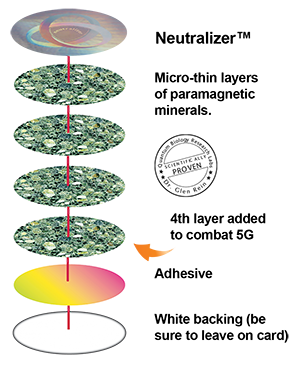 The Neutralizer is made of four micro-thin layers using a proprietary blend of activated paramagnetic elements.

Another way of looking at the coexistence of particles and waves is to say the matter oscillates between particle and wave form. This way, depending upon the detection technology, energy can be ‘caught’ in the safe form.

Bio-electromagnetic researcher, Glen Rein, has suggested a possible mechanism to explain the protective effect of the Neutralizer. He states that

“…the natural coherent energy emanating from Aulterra [Enhance} neutralized the incoherent energy from the man-made EMFs, rendering it harmless to human DNA.”

The latest studies confirm that what the cellular phone corporations do not want you to know. Even casual use of a cell phone can cause damage to DNA in sensitive areas of the brain

A landmark study conducted by Dr. Henry Lai of the University of Washington showed that even at low levels, exposure to radio frequency electromagnetic fields and radio frequencies (EMF/RF) caused DNA damage to brain cells of rats, resulting in loss of short and long-term memory and slower learning. He further noted:

“DNA damages in cells could have an important implication on health because they are cumulative.”

A study done at Penn State University concluded that EMF exposure produced no effect for the “first few minutes, . . . then a cascade of microbial destruction occurs.” 2 The effect of this damage has been linked to cancer, memory loss and even sterility.

Even using an ear-piece will not keep you out of danger from EMF exposure, because ear pieces’ act like “conduits” to funnel as much as three times the harmful radiation to your brain.

Like the BioElectric Shield, the Aulterra products are all natural and will enhance and multiply the protective effects that each one offers individually. IF YOU HAVE 5G IN YOUR AREA - WE RECOMMEND FULL-BODY PROTECTION - 5G networks, WiFi and Smart Meters and all the rest of the electronics around you bombard you from all sides 24/7 - You'll want additional protection

Upgrade: If you have a Level 1 or 2 Shield, you might consider upgrading to a Higher Level for more balance and protection.

IMPORTANT NOTE DR. BROWN: It's great you are considering putting EMF protection on your phone. How about protecting your entire body? We've designed a free EMF EXPOSURE QUIZ, that will provide you with a recommendation for protection your entire body! WiFi, Smart Meters, and 5G are penetrating our atmosphere with more EMF radiation everyday. You may not feel it, but your body does. Take the Quiz and find out what level of full body protection you could get for yourself!  Both quizzes give a Shield recommendation - the EMF quiz focuses more on your EMF exposure, the HSP quiz includes your sensitivity to other people's energy as well as your EMF exposure.

P.S. We also have a quiz for people who are sensitive to other people's energy. EMF radiation often affects them more than others. Take the Highly Sensitive Person Quiz.

AegisGuard™ LS Radiation Shield - Spray for all Electronics and Windows

Get a Free Subscription to EMF Safety Tips and Receive a Coupon Code for 15% Off Your First Order (Check your Email to Get the Code!)

Products on our web site have not been evaluated by the Food and Drug Administration (FDA). Our products are not intended to diagnose, treat, cure or prevent any disease. Please consult with your physician or healthcare provider for medical advice.